In just two years, the number of planning applications to install ANPR cameras in car parks increased by 61 per cent, according to research from Churchill Car Insurance.

They are now frequently found at supermarkets, retail estates, fast food restaurants, hospitals and transport hubs such as train stations.

ANPR cameras have caused much debate as, in some cases, drivers have been automatically issued tickets when they say they did not overstay the car park’s time limit, penalised when using the same car park more than once in a single day or when drivers didn’t know there was a time limit on free parking.

Some 9.8million drivers, in non-council operated car parks, are caught on ANPR cameras and issued parking tickets each year, the data claims.

Motorists paid fees totalling £1.07billion after being caught by ANPR parking cameras in the last 12 months alone, with £2,030 generated every minute.

The average penalty currently stands at £68.90 – the equivalent of £2.9million every day.

Some 3.4million drivers also received a penalty due to overstaying the allotted time slot – the most common reason for ANPR based tickets.

As people relied on their cars more than ever due to coronavirus, this number could increase.

One in eight drivers had a penalty overturned when they contested it.

The research also found that between 2017 and 2019, the number of retrospective planning applications – those made after an ANPR camera had been erected – increased by 106 per cent.

Some 29 per cent of all planning applications between 2017 and 2019 were retrospective.

However, between 2017 and 2019, local councils rejected six per cent of retrospective planning applications for ANPR cameras.

Many drivers have sought to challenge the legality of parking penalties issued after being caught by an ANPR camera when planning permission had not been granted.

But the ombudsman service, Parking on Private Land Appeals, said: ‘The absence of planning permission would not affect the motorist’s ability to understand and keep to the parking conditions.

‘The motorist would still have entered into a parking contract.’

With such a large increase in planning applications for ANPR cameras, it is not surprising that the number of penalties issued is increasing.

Overstaying the allotted timeslot was the most common reason drivers received ANPR based parking penalties, with 3.4million drivers – equivalent to 23 per cent – receiving one.

This was followed by 2.4million people – equivalent to 16 per cent – who did not realise they were required to pay for the parking and thought it was always free and 1.7million – 12 per cent – who said that they received the penalty because the ANPR camera was faulty.

How to appeal an unfair ticket

If you receive a parking ticket that you think is unwarranted, you can dispute it with whoever gave you it in the first place.

A private parking company must be a member of one of two associations – either the British Parking Association or International Parking Community in order to request your details from the DVLA.

You have 28 days with BPA firms, and IPC companies should allow you at least 21 days to appeal. They should respond to your appeal within 35 or 28 days, respectively.

If they reject your appeal, you can then apply to two independent bodies, the Parking on Private Land Appeals and Independent Appeals Service.

When contacting them, state clearly your reasons for appeal and provide relevant evidence which could be receipts, witness statements, or footage from your dash cam if you have one.

Some 27 per cent that were caught out with a faulty ANPR camera were at shopping centres or retail parks, with 20 per cent caught out at the supermarket and a further 20 per cent at hospitals.

When it comes to paying, some are more willing to pay than others.

While the 30 per cent of people paid straight away as they knew they were in the wrong, 21 per cent contested the payment, but still had to pay.

Jane Morgan, business manager at Churchill Car Insurance, said: ‘Even car parks that appear to be free, such as supermarket and fast food restaurant car parks, increasingly have time limits for parking with ANPR cameras capturing drivers’ details – customers that stay too long are issued with large fines.

‘We are urging drivers to be cautious and to take an extra minute to check for signs displaying information about charges and timings when using any car park. It could prevent you from getting caught out and help avoid unexpected expensive fines.’

Research was conducted with Opinium among a 2,003 UK adults in July.

183 councils responded regarding, retrospective applications for ANPR cameras but only 35 provided data. 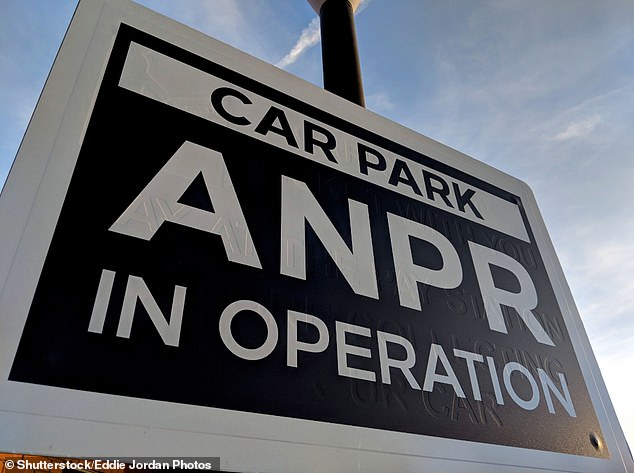 How DVLA profits from driver details

Drivers’ details are sold to private companies by the DVLA – it made nearly £17million selling motorists’ details to private parking companies in 2018.

Data analysed by the RAC Foundation also predicts 6.8million drivers would have their keeper records sold to car parking firms in the 12 months to April 2019, a 20 per cent increase on the same period a year previous.

Companies that are members of one of two accredited bodies may apply to the DVLA to request someone’s details for £2.50 a pop in order to charge them for ‘breaching’ their contract.

We campaigned about some cases which saw motorists chased, bullied and harassed over private parking charges for dubious and minor infringements.

A large number of drivers were found to be worried about the threat of bailiffs and higher charges when it comes to private parking charges that they simply pay up out of fear, rather than appeal.

AA president Edmund King OBE is one of those who wants to stop the private parking sharks menacing drivers across Britain.

He told This is Money last year: ‘We support your hard hitting campaign to bring common sense and fairness to private parking enforcement.

‘We had hoped that our actions in getting the cowboy clampers outlawed would have improved the situation for drivers but it seems that some of the unscrupulous highwaymen have now turned their hand to dishing out tickets on parking land.’

A new Parking (Code of Practice) Act 2019 created since, is a single code of practice and independent appeals service that applies across the whole industry.

It added at the time that the new appeals service would make it easier for drivers to challenge unfair parking charges.

Rishi Sunak MP – now Chancellor, and then Local Government Minister wrote for This is Money, stating: ‘The rogue operators are on their way out for good.’

Some links in this article may be affiliate links. If you click on them we may earn a small commission. That helps us fund This Is Money, and keep it free to use. We do not write articles to promote products. We do not allow any commercial relationship to affect our editorial independence.

The best Halo games, ranked from best to worst