A camera in the security lines at Dallas Love Field is scanning every passerby for elevated temperatures, in a test by the airport and Southwest Airlines to find out if it can detect sick people before they board flights.

In the back hallways, employees are getting temperature checks at kiosks before they start work each day, trying to keep sick employees out of the airport, too.

As airlines, companies and governments scramble to reopen a battered economy facing the eighth month of a worldwide pandemic, airports are now the frontline for evolving thermal imaging technologies designed to pick out infected travelers before they can spread COVID-19 further.

Thermal camera makers such as Dallas-based Wello Inc. and Beaumont’s Infared Cameras Inc. have suddenly been inundated with requests for their technology. Even small restaurants, hotels and schools are asking about it.

“It’s not just convention centers and airlines,” said Gary Strahan, CEO of Infrared Cameras Inc. “It’s impacting so many different places. We have to do something.”

Thermal cameras that can pick out COVID-19 cases are a Holy Grail for an airline industry that has lost 70% of its business and is facing another quarter of multibillion-dollar losses, along with any other business or institution trying to keep people safe.

Airlines are trying hard to find ways to limit the spread of COVID-19 and assure governments that travelers aren’t bringing the disease with them.

States such as New York require two-week quarantines for travelers from most other states, as do Hawaii, Connecticut and New Jersey. Hawaii is lifting its quarantine requirement Oct. 15 for travelers who test negative within 72 hours of flying, and similar programs are in the works for travel to Costa Rica, Jamaica and the Bahamas.

International travel is at a standstill as the European Union and many Caribbean nations also have restrictions that effectively cut off air travel. The peak holiday period at the end of the year, when warm-weather destinations make an outsize proportion of their tourism profits, has some Caribbean islands making plans to recapture part of the region’s estimated $44 billion in losses.

Airlines have gone to great lengths to convince travelers that airplanes are safe for travel, despite being a target early in the pandemic. Planes have air systems that bring in new air every three minutes. Airlines are applying antibacterial coatings to high-contact areas in their cabins. And some are still underselling flights to leave middle seats open.

In a recent appearance on CNBC, American Airlines CEO Doug Parker said pilots and flight attendants have lower COVID-19 infection rates than the general population and lower rates than ground employees. A study backed by Boeing and Airbus and released last week also said that just 44 COVID-19 cases have been linked to air travel.

With thermal cameras selling quickly and popping up in more places, experts question whether the technology can really be effective in identifying sick people and slowing a virus that has proved very hard to control.

“In the past, when we’ve seen things like the H1N1 flu or the Ebola virus, infrared thermal scanners at airports haven’t been effective in stopping the spread of diseases,” said Katelyn Gostic, an epidemiologist at the University of Chicago who has been studying COVID-19. “If anything, it could provide a false sense of security that you are safe just because you had a temperature check.”

Even if working perfectly, thermal cameras have their limitations, Gostic said. People infected with COVID-19 often don’t start showing symptoms until three to four days after infection — about the same time they are the most infectious. By that point, they should start feeling sick as well and, hopefully, choose to stay home.

Those infected with COVID-19 have also been known to spread the virus without any symptoms.

Today’s thermal cameras can be very precise, but aren’t very good at quickly scanning large crowds, said David Pascoe, a professor emeritus at Auburn University and a delegate for infrared scanning and pandemic screening with the International Organization for Standardization.

“Someone told me a school was scanning 70 people per minute and that just won’t work,” Pascoe said. “At minimum, you need a quick pause to get a clear picture. In big crowds, short people will be blocked by tall ones or someone might have their head turned.”

The technology, which experts say is up to 99% accurate in detecting surface temperatures, usually works by scanning between the nose and eyes.

Dallas-based Wello was hired by Dallas Love Field to put kiosks at its employee entrances, something that is gaining traction at businesses nationwide, said Wello founder and CEO Rik Heller. The Dallas Morning News uses Wello kiosks at its printing plant in Plano.

“We started with hospitals and moved into the workplace,” Heller said. “The workplace is the key to the economy and now it’s moving into big places like airports that have large movements of people.”

Wello now has about 3,000 customers using touchless kiosks that scan employee badges and then use the infrared cameras to check temperatures. Those who pass the test are given a sticker.

“We really wanted to take a proactive approach in making sure we were doing everything we can for our employees and passengers,” said Marissa Sanchez, the airport’s interim assistant director.

The airport hasn’t caught anyone yet with COVID-19, but did send an employee home who ended up having strep throat.

The technology scanning passengers at Love Field is a partnership between Southwest Airlines and the city-owned airport, using cameras from Infrared Cameras and Irving-based NEC Corp. of America, a technology company that develops facial recognition technology.

NEC and Infrared Cameras signed a $37.5 million deal to put the systems in airports in Hawaii, a state that has been vigilant about stopping the spread of COVID-19 despite the island chain’s heavy reliance on tourism dollars.

“We get the temperatures off of deplaning passengers and if they have a temperature of 100.4 or greater, then we get a face image as well so that it can be sent to the proper person in the airport,” said Jason Van Sice, NEC’s vice president of advanced recognition systems.

Passengers with elevated temperatures can be referred to a medical expert for an actual COVID-19 test, Van Sice said.

Southwest Airlines spent four months testing thermal cameras at Love Field, starting in July. Since it began individual screening on Oct. 1, Southwest said it has tested 40,000 passengers and none had a temperature of 100.4 degrees Fahrenheit or higher.

Still, Infrared Cameras’ Strahan said thermal imaging technology won’t be 100% effective. The goal is to identify enough travelers who are sick to help lower the spread.

“You are still going to need face masks and social distancing and testing,” Strahan said. “But the airline industry is decimated so they need a lot of things working together to make people feel better about flying again.” 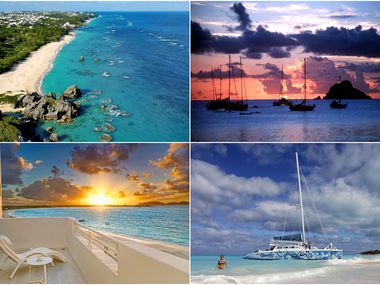 Samsung Galaxy Z Fold 3 might have a pop-up camera, but we’re not convinced

How to Fix Missing Taskbar Icons in Windows 10

The Xbox Series X will be the console for HDR gaming...