Reports of reinfection with the coronavirus evoke a nightmarish future: Repeat bouts of illness, impotent vaccines, unrelenting lockdowns — a pandemic without an end. A case study published Monday, about a 25-year-old man in Nevada, has stoked those fears anew. The man, who was not named, became sicker the second time that he was infected with the virus, a pattern the immune system is supposed to prevent.

But these cases make the news precisely because they are rare, experts said: More than 38 million people worldwide have been infected with the coronavirus, and as of Monday, fewer than five of those cases have been confirmed by scientists to be reinfections.

“That’s tiny — it’s like a microliter-sized drop in the bucket, compared to the number of cases that have happened all over the world,” said Angela Rasmussen, a virologist at Columbia University in New York.

In most cases, a second bout with the virus produced milder symptoms or none at all. But for at least three people, including one patient in Ecuador, the illness was more severe the second time around than during the first infection. An 89-year-old woman in the Netherlands died during her second illness.

Rare as these cases may be, they do indicate that reinfection is possible, said Akiko Iwasaki, an immunologist at Yale University, who wrote a commentary accompanying the Nevada case study, published in The Lancet Infectious Diseases.

“It’s important to note that there are people who do get reinfected, and in some of those cases you get worse disease,” Iwasaki said. “You still need to keep wearing masks and practice social distancing even if you have recovered once from this infection.”

We asked experts what is known about reinfections with the coronavirus, and what the phenomenon means for vaccinations and the course of the pandemic.

Reinfection with the coronavirus is an unusual event.

First, the good news: Reinfection seems to be vanishingly rare.

Since the first confirmed case of reinfection, reported in Hong Kong on Aug. 24, there have been three published cases; reports of another 20 await scientific review.

But it is impossible to know exactly how widespread the phenomenon is. To confirm a case of reinfection, scientists must look for significant differences in the genes of the two coronaviruses causing both illnesses.

In the United States, where testing was a rare resource much of this year, many people were not tested unless they were sick enough to be hospitalized. Even then, their samples were usually not preserved for genetic analysis, making it impossible to confirm suspected reinfections.

A vast majority of people who do get reinfected may go undetected. For example, the man in Hong Kong had no symptoms the second time, and his infection was discovered only because of routine screening at the airport.

“There are a lot of people that are going to also have been exposed that aren’t having symptoms, that we’re never going to hear about,” said Marion Pepper, an immunologist at the University of Washington in Seattle.

People whose second infections are more severe are more likely to be identified, because they return to the hospital. But those are likely to be even rarer, experts said.

“If this was a very common event, we would have seen thousands of cases,” Iwasaki said.

In most people, the immune system works as expected.

Survivors of COVID-19 who spent time on a ventilator may be at risk of long-term disability and illness. Image: Newscom/AP

This variability is entirely expected, experts said, and has been observed in patients with diseases like measles and malaria.

“You’ll never have the distribution of anything with millions of people where you don’t have some very severe rare cases happening at the fringe,” said Dr. Michael Mina, a pediatric immunologist at the Harvard T.H. Chan School of Public Health.

At least two of the reinfected patients in Europe had compromised immune systems, for example, and the 89-year-old woman who died was receiving chemotherapy. In other reinfected patients, genetic factors or the lack of certain previous immune exposures may have blunted the body’s ability to fight off a second attack.

“There are some people who just don’t develop good immune responses to certain pathogens,” said Florian Krammer, an immunologist at the Icahn School of Medicine at Mount Sinai. “What is causing that? We’re not sure, but it’s rare, usually.”

In a vast majority of known infected patients, experts said, the immune system functions as it should against other pathogens.

“There are a lot of different infections where you can get reexposed to the virus, and we would probably not know because you don’t have symptoms,” Pepper said. “And that might be an important part of boosting immunity.”

When the body is exposed to an unfamiliar virus, it is normal first to develop some immunity and then to increase that response with each additional exposure. This phenomenon is well known among children, but it is less often seen in adults because they rarely encounter new viruses, Mina said.

“I think it’s important to recognize that reinfections are literally embedded in the evolution of our immune system,” he added. “We sometimes lose track of that with so many people talking about this who really haven’t studied the immune system.”

For every confirmed case of reinfection, there are dozens of anecdotal reports of infected people who were sick and seemingly recovered but then became ill again weeks to months later. 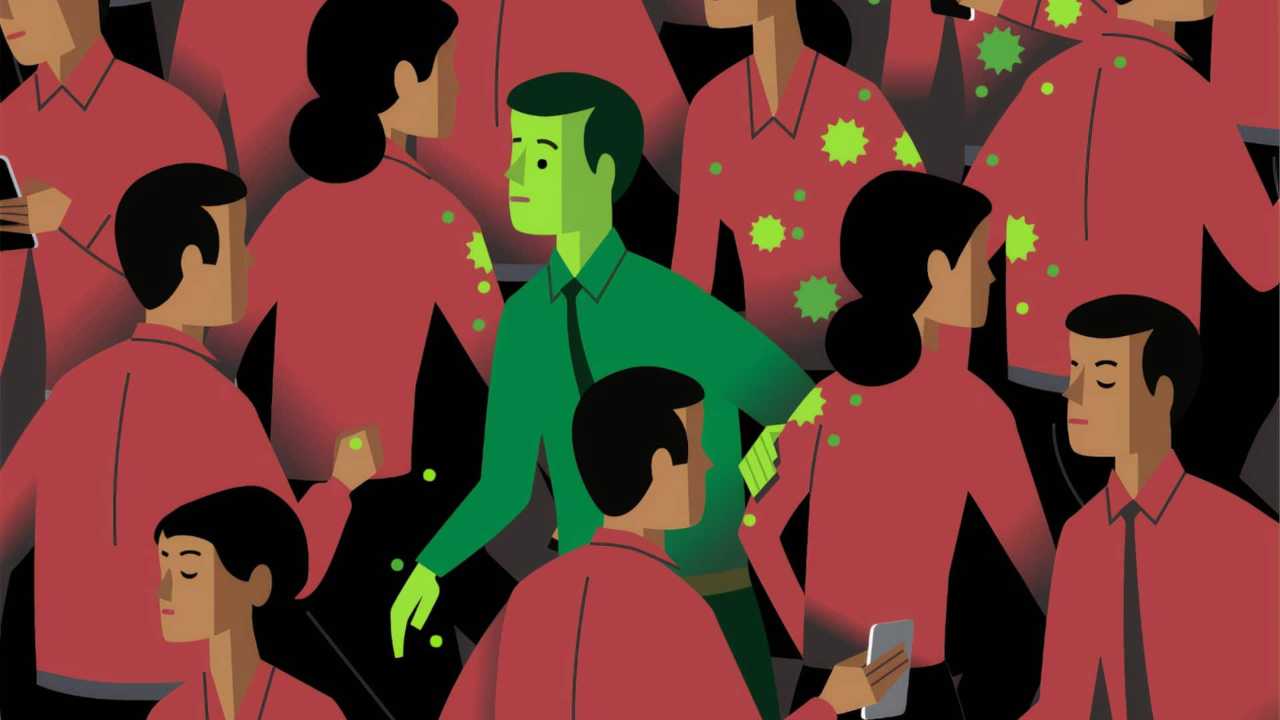 They don’t run a fever. They don’t cough or feel short of breath but they do shed virus like symptomatic people do. Image: UN COVID-19 response/Unsplash

Usually there are crucial data missing in those cases, like a confirmed lab diagnosis, or a virus sample that can be sequenced.

“The question is always, Is it a real reinfection?” Krammer said. “It’s very often very challenging to kind of get that kind of data.”

A vast majority of these cases are unlikely to be true infections. More likely, these are people experiencing a resurgence of symptoms connected to the original infection. The virus may set off an inflammatory response that can flare up even weeks later and cause symptoms like fatigue and heart problems. In rare cases, some patients may develop a chronic low-grade infection with the virus that never quite goes away.

“Even with viruses that can cause acute infections, like flu,” Krammer said, “you can have persistent infections if your immune system is sufficiently compromised.”

Although these are not real reinfections, they are still worrying if they lead to renewed illness or hospitalization months after the initial infection, Rasmussen said. “If there’s recrudescence happening frequently, and people are getting severely ill the second time around, that’s potentially its own problem,” she said.

People with a second bout may pass the virus to others.

Reinfected people without symptoms may still transmit the virus to others. The patient in Hong Kong, for example, was isolated in a hospital even though he had no symptoms. But his viral load was high enough that he could have passed the virus to others.

“Obviously, that person wasn’t ill, so it bodes well for him, but it doesn’t bode well for the community,” Pepper said.

But to be sure of infectiousness, researchers may need to look for live virus. South Korean researchers investigated hundreds of reports of reinfection and were able to rule them out as real cases after failing to grow infectious virus from the samples.

Similar procedures would be needed to rule out the possibility of transmission in each patient, Rasmussen said, adding, “I think that’s the only way you’d be able to get to the bottom of that.”

Vaccines may be crucial to preventing reinfections.

Reports of reinfection have raised concerns about whether vaccines for the coronavirus will be effective and help communities achieve population immunity. The worry is that the immunity produced by vaccines will not be sufficient in preventing reinfections with the virus.

In reality, experts said, vaccines have a better chance at generating robust immunity than does natural infection with the virus.

For example, the coronavirus is particularly adept at dodging the body’s early immune alarms, buying valuable time to seed an infection. In some people, this lag eventually triggers a cascading immune overreaction that can be more harmful than the infection itself.

Vaccines are intended to unfurl an immune response without interference from the virus, and thus may avoid this inflammatory sequence. Vaccines can also be manipulated to enhance immune memory, in that way producing more lasting, more protective responses.

Vaccine trials are designed to look for an absence of disease, rather than of infection, and it’s unclear whether vaccines can suppress virus levels enough to prevent transmission to others.

Uber, Lyft futures on the line in Prop. 22 fight

How tech can help you thrive amid the pandemic winter blues

Here’s how to check if your mail-in ballot has been received...

Why contact-tracing apps haven’t lived up to expectations

The Google Pixelbook Go and Google Nest WiFi routers are on...