I have always believed that educating and empowering consumers is the best way to grow and sustain a business. To this end, we decided to kick off a marketing campaign to step up consumer connect and launch a CP Plus line of security products for domestic consumers. An advertising campaign was clearly the way forward.

However, we were not quite certain how to proceed. There was no benchmark across the world for us to look at or study. Security companies were not given to ad campaigns—it was clearly virgin territory and we would be the first company globally to run ad campaigns to market our products. It was a sobering thought.

Getting the right message out was extremely important. To begin with, we dallied with some mid-level ad agencies, because the money we would be pouring into the campaign would be our own. But we swiftly realized that these mid-level players would not do. If we wanted to make our presence felt in the market, we had to rope in the best, so we shifted gears and invited all the top ad agencies to pitch for the campaign.

They came in droves, with each agency sending contingents of fifteen to twenty people to make their presentation.

We renewed our search for a campaign that could not only introduce the security camera but ensure that it captured the public imagination. We invited all the leading creative agency and at last Dentsu came up with a bullseye: the ‘Uparwala sab dekh raha hai’ tag line.

Aditya asked me for my opinion. ‘What do you think?’

‘Everyone in India connects with the Uparwala,’ I replied.

It took us two years to conceive the campaign. The campaign was ready and it was worth every bit of the time, money and effort we had expended.

Dentsu made the first three films and the campaign was ready in time for the IPL season. We had partnered with Rajasthan Royals for the IPL tournament. The films were aired at prime time and all three revolved around social themes. The first portrayed college ‘freshers’ being ragged by seniors on their first day at college, until someone spotted the camera above and the bullying came to an abrupt halt! The second depicted a nasty nanny whose shenanigans were caught on camera. The third featured a CCTV camera acting as a deterrent to potential eve-teasers.

Tapping into popular social issues and opting thereby for a positive-themed campaign was a conscious decision. The more obvious choice would have been to depict criminals being caught red-handed, but we wanted to showcase our products without the fear factor. We figured that a negative campaign would be less effective than highlighting ‘security’ as an ‘emotional need’. The campaign was an instant hit.

It was a multimedia campaign, with several variations tailored to the medium, whether digital, mobile, radio or outdoor. A year later, we tied up with the IPL team, Kings XI Punjab. The CP Plus campaign, the first of its kind globally for a CCTV brand, had borne rich fruit.

Also read: With Bappi Lahiri to Govinda, India’s ad industry is laughing at itself. Not everyone gets why

In 2017, the company signed top Bollywood star Salman Khan as its brand ambassador. This was necessary, because while the Dentsu ‘Uparwala’ campaign had given us a market presence and to a certain extent, brand recall, but the same could not be said for product recall! We felt that Salman, with his mass appeal and ineffable connect with the common man, could do the trick. With him on board, we would be assured of instant brand and product recall. And so it proved to be.

Given that Salman was our brand ambassador, we felt that in-film advertising in some of his blockbuster hits like Sultan (2016), Tiger Zinda Hai (2017), Race 3 (2018) and Bharat (2019) would pay dividends. Our marketing campaign drew widespread appreciation and won several awards. We also sponsored Salman’s television game show Bigg Boss, and serials like Savdhan India and 24. The content of these serials, we felt, had a certain synergy with the concept of security, embodied in our products. Better still, being on prime time gave us the instant brand and product recall for which we had been aiming. In fact, Bigg Boss gave us our biggest impetus, because the reality show was based on surveillance. During the IPL campaign, we competed with hundreds of brands for audience attention, but with Bigg Boss, we were sharing airtime with just a handful of brands. Thanks to the happy concomitance of the Uparwala ad and Bigg Boss, CP Plus finally came of age. 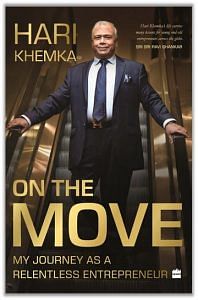 This excerpt from On The Move: My Journey As A Relentless Entrepreneur by Hari Khemka has been published with permission from HarperCollins India.

Why news media is in crisis & How you can fix it

But the news media is in a crisis of its own. There have been brutal layoffs and pay-cuts. The best of journalism is shrinking, yielding to crude prime-time spectacle.

ThePrint has the finest young reporters, columnists and editors working for it. Sustaining journalism of this quality needs smart and thinking people like you to pay for it. Whether you live in India or overseas, you can do it here.

Which 360 Camera Should You Get?

Powerbeats down to cheapest-ever price for Black Friday

This weird lens filter traps the world in a sphere in...