Our team mainly works on leopards and other terrestrial mammals in protected areas and other forests of Karnataka. Our research focuses on establishing the baseline population of leopards in both forests and human-dominated landscapes, and further monitoring the same areas periodically to assess changes in the population.

We survey an area of interest using camera-traps which capture images of wildlife with minimal intrusion. Camera-traps are remotely triggered, motion-sensing cameras that capture a photo every time the infrared beam is cut either by an animal or a person. They are relatively light, easy to use, and low-fuss on the field as we don’t need to carry a laptop just to download data from each camera-trap. Each unit has a protected USB slot where a pen drive can be inserted and we can instantly download the data onto the pen drive. However, each unit does have to be tethered firmly to a tree or a pole lest curious young elephants tear them away during play, or poachers steal them. It is interesting to note that the unsuccessful parties get captured on the very camera-traps they try to steal, or on the one installed right opposite (which they miss spotting).

Elephant calves are full of curiosity and enjoy interacting with things on the ground that they can touch and feel. This little one is having a good time stripping the camera-trap away from the sapling it was tethered to.
Photo Credit: Sanjay Gubbi

We can easily programme the camera-traps for trigger sensitivity and frequency of captures as per our requirement. The infrared sensor detects the motion of the animal thus, triggering the camera to capture a photo. The quality of the photographs is sufficient to differentiate the patterns on animals such as leopards and tigers which is what we’re primarily concerned with. However, we do enjoy our share of entertaining photographs of macaques posing for pond-side selfies, or dholes that resemble flying corgis.

We get several thousands of photographs from each study site which we initially used to manually sort and analyse depending on the species photographed. The effort of sorting the photographs alone often required an enormous amount of manual work, and usually took us several months in a year. Apart from the large amount of resources it consumed, it was a hindrance to working in more sites. With the leopard being a widespread species, working in a larger number of sites was critical to establish benchmark data for as many areas as possible. If we couldn’t sort photos from one site in a manageable frame of time, how would we extend the study beyond? 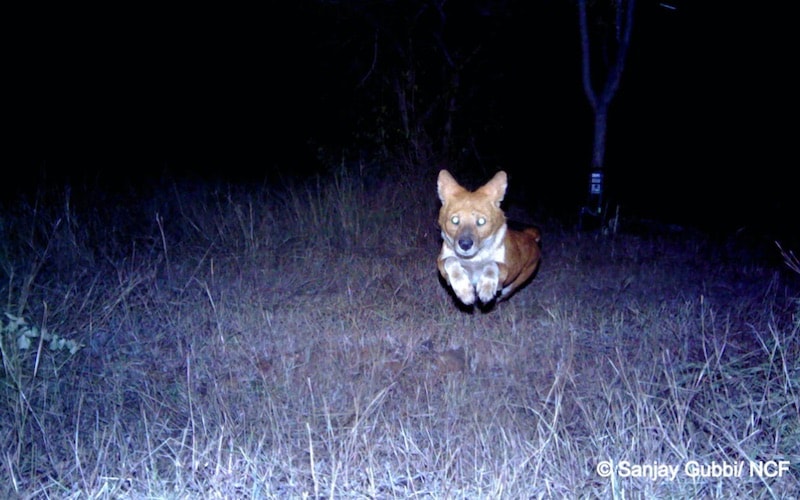 We photo-captured this dhole in the middle of a sprint. We assure you, this is not a flying Corgi, however much it may resemble one.
Photo Credit: Sanjay Gubbi

Given the large-scale of data and number of photos to sift through, we collaborated with Mr. Ramprasad, the former chief technologist for AI at Wipro who helped design a programme that could do the image sorting for us.

The software uses a convolutional neural network (CNN), which is a framework that enables machine-learning algorithms to work together to analyse images. This kind of work falls under an interdisciplinary field called ‘computer vision’ which deals with training machines to identify and classify images much like a human would. The CNN classifier needs to be trained to recognize the features, colours, shapes, sizes, and unique patterns associated with leopards and other animals. We fed thousands of images to train the classifier to recognize leopards from our field sites with a certain measure of accuracy.

In the first stage of analysis, the software helps us immensely by removing all the ‘noise’ – all irrelevant images without the target wild animals, or those with humans or livestock. Camera-traps are often triggered by the slightest motion of even falling leaves, leading to a large portion of the images being false captures. As an estimate from our largest site in 2018, out of a total of 2,99,364 images captured, only about 6% (17,888) of the images obtained were of mammals, with the rest of the 94% being humans, livestock, other species and false triggers. 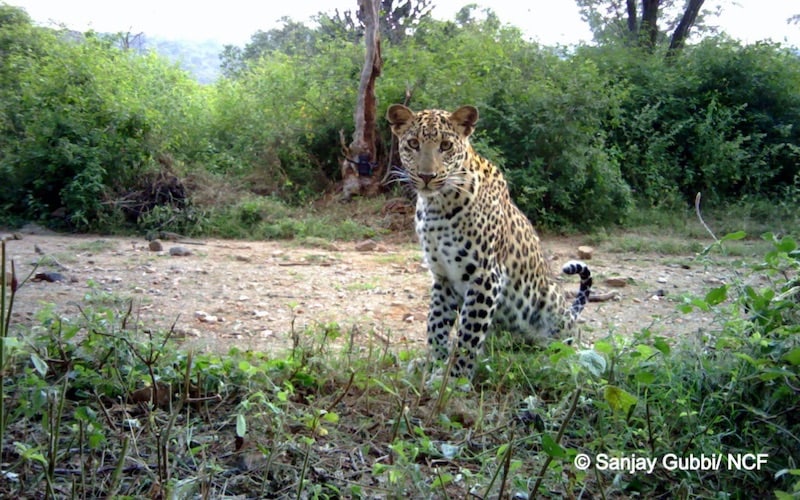 Most photographs we get are of animals walking by – half blurred or partial. This leopard was kind enough to sit and pose for our camera-trap.
Photo Credit: Sanjay Gubbi

For the second stage, we trained the classifier to identify and segregate the animal images as per the mammalian species we focus on. The classifier currently operates at an accuracy of around 90% for big cat (leopards and tigers) identification. Its accuracy will go up by learning more characteristics of those target species as we feed more photographs from similar habitats into the software. This accuracy is highly useful as many images we obtain are partials with only some body parts, or with obscured patterns, at different angles, or captured at night or in poor lighting. Currently, the accuracy of the classifier for certain distinct species such as leopards, tigers, and porcupines is higher than other species such as sambar deer, dhole, etc. We can remedy this by training it with more and diverse images of these species.

To date, we’ve used this software to sort through more than 1.6 million photographs to identify 363 leopard individuals. With this software, our workload has reduced from months to hours. The monumental effort we would have otherwise put into sifting through these many images manually has been cut down hugely. To put into perspective, the classifier can process up to 60,000 images in nearly half the time required by three researchers working full-time for three weeks, saving us a lot of valuable time and effort. 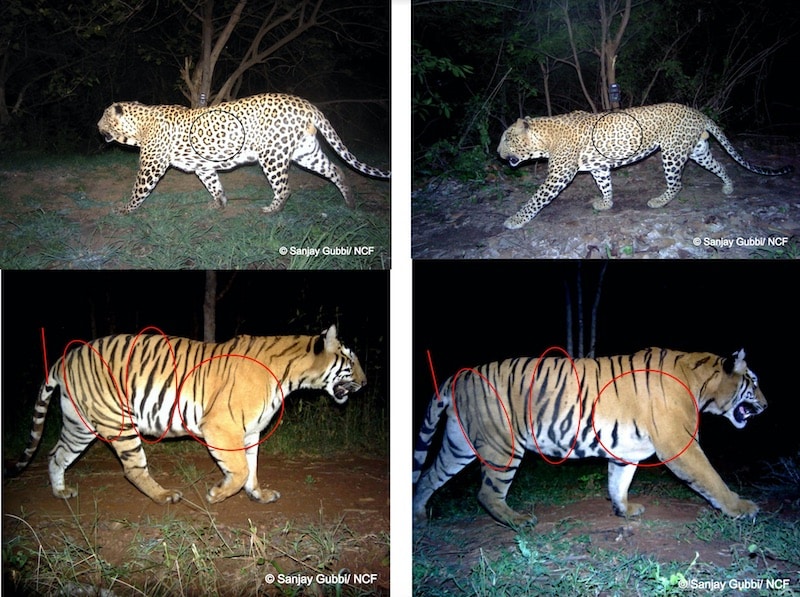 Tiger and leopard individuals can be differentiated based on the unique patterns on their bodies. Notice how the stripes differ among the tigers along the flanks, belly, undersides and the legs. The rosettes differ between the leopards in the shapes, and the way they are clustered all over the body.
Photo Credit: Sanjay Gubbi

We compare the images of leopards and tigers that have been validated and extracted by the classifier by using another software called Wild-ID which pulls out images with similar patterns for us to match. These automated matches do have some margin of error thus, we validate the final set of images manually. However, this software still cuts down our effort of going through nearly 900 images to identify around 70 individuals to find the initial matches. Looking through hundreds of images of patterned animals can be extremely strenuous for the eyes, further bringing in the chances of human error.

We have been working towards incorporating technology and relevant software into different aspects of our work, to cut down the manual effort and get quicker results. The aim is to minimise error, maximise efficiency while also optimising the human-effort component that goes into implementing a research study on such a large scale.

Amrita Menon is interested in conservation biology and population ecology. She is currently working as a research affiliate on the leopard conservation project in Karnataka with the Western Ghats Programme at NCF.

Sanjay Gubbi is a conservation biologist whose work focuses on the conservation of large carnivores like tigers and leopards. He currently works as a Scientist and Programme Head with the Western Ghats Programme at Nature Conservation Foundation.

Phalguni Ranjan is a marine biologist working as a science and conservation communicator with the Western Ghats Programme at NCF.

This series is an initiative by the Nature Conservation Foundation, under their programme Nature Communication to encourage nature content in all Indian languages. If you’re interested in writing on nature and birds, please fill up this form.

How to find the best deals during online sales? We discussed this on Orbital, our weekly technology podcast, which you can subscribe to via Apple Podcasts, Google Podcasts, or RSS, download the episode, or just hit the play button below.

Lidar on the iPhone 12 Pro: What it can do now, and why it matters for the future of AR, 3D scanning and photos

Tech gifts for your favorite junior roboticists and hackers

Netflix Is Raising Its Prices For US Customers

Tech gifts for your favorite junior roboticists and hackers