To catch a glimpse of a tigress with her cubs is extremely rare – luckily, the field director of the Dudhwa Tiger Reserve has managed to capture the majestic animal on camera.

A wild cat is seen walking along with her four cubs away from the vehicle of the field director, who recorded the moment.

The tigress turns around and starts moving towards the vehicle and walks right up to the field director who remains calm.

The video captures the path of the tigress, who later walks away with her cubs into the forest.

“Brilliant and beautiful capture of tigress with cubs in Dudhwa Tiger Reserve by Field Director. A worth watch,” Indian Forest Service officer, Ramesh Pandey, wrote while sharing the clip, which soon went viral and prompted many reactions among people.

Brilliant and beautiful capture of tigress with cubs in Dudhwa Tiger Reserve by Field Director. A worth watch. @ntca_india @UpforestUp pic.twitter.com/1maLjD13K7

Since being shared, the video has garnered over 25,000 views and nearly 1,000 likes. Taking to the comments section, one user said, “Rewards of Forest Sevice. Would have been more rewarding to all of us without the sound of the camera.” A second user commented, “Tyger Tyger, burning bright, In the forests of the night.”

Also Read: Video Shows A Cow Being Offered As Bait To Lions In Gujarat’s Gir Forest, For An Illegal Show

A recent report states that trenches have been dug up along the boundary of Dudhwa Tiger Reserve (DTR) to prevent the big cats form moving into human habitation. 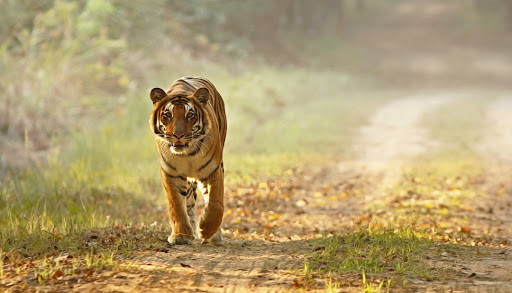 According to IANS, Uttar Pradesh Forest Department has also deployed two elephants and mounted camera traps in the adjoining villages, apart from using drone-mounted cameras, to monitor the movement of the tiger that has claimed three human lives in the past one month.

Divisional Forest Officer (DFO) Anil Patel told reporters that the presence of herbivores like wild boars, Nilgai, and others in the standing sugarcane crop, was attracting the increasing numbers of tigers and leopards from the jungle.

Also Read: After Hearing About Tiger In US Contracting COVID-19, Telangana Man Ties Masks On His Goats

The DFO said, “We have urged the farmers to work in groups and play music at high decibels so that the loud sound keeps big cats at bay. Besides, the department has deployed extra teams to keep an eye on the movement of tigers.”

Forest officials have also intensified vigil to ensure nobody enters the forest area. “Our teams are working round-the clock in three shifts,” he said.

Show off the passage of time by shooting a traffic trail...

These Sony noise-canceling headphones are $88 for Cyber Monday

Show off the passage of time by shooting a traffic trail...

These Sony noise-canceling headphones are $88 for Cyber Monday